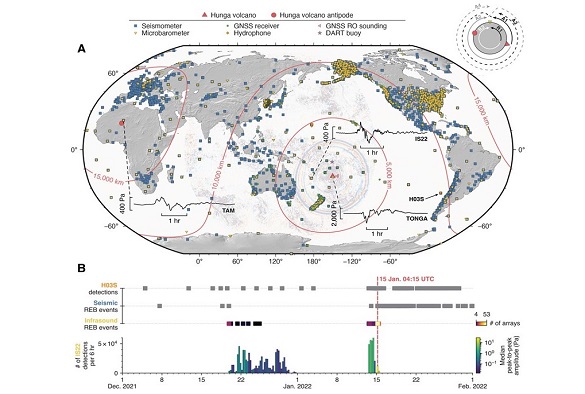 Only a few months after the eruption of the Hunga volcano near the island of Tonga, an international team of scientists, including a University of Liverpool researcher, has revealed it to be one of the most powerful eruptions in 140 years.

In a paper published in the journal Science, they reveal that the eruption created a variety of atmospheric wave types, including booms heard 6,200 miles away in Alaska.

It also created an atmospheric pulse that caused an unusual tsunami-like disturbance that arrived at Pacific shores sooner than the actual tsunami.

The study suggests that the pressure waves unleashed by the eruption were comparable in size to those generated by the 1883 Krakatoa eruption and 10 times larger than those from the eruption of Mount St. Helens in 1980.

Silvio De Angelis, Professor of Volcano Geophysics at the University of Liverpool’s School of Environmental Sciences, is part of the team of 67 scientists from 17 nations that undertook this research in an unusually short amount of time due to significant scientific interest in the eruption.

An expert in volcanic seismology and acoustics, Professor De Angelis contributed to the analysis of the complex eruption mechanisms and the exceptional range of seismic and pressure signals generated.

He said: “A major difference with the Hunga explosion compared to the 1883 Krakatoa eruption is the amount of data gathered due to more than a century of advancement in technology and a proliferation of sensors around the globe. This has given us unprecedented insight into what we describe in the paper as an "unusually energetic" volcanic eruption."

The study provides an unprecedented insight into the behaviour of low-frequency atmospheric pressure waves, called Lamb waves, during the Hunga eruption.

Lamb waves are a relatively rare phenomenon that travel at the speed of sound, aren't detectable by humans and are slower than shock waves. They were detected after the Hunga eruption and observed to circle the planet in one direction four times and in the opposite direction three times.

The interaction between the atmospheric pressure perturbations from the eruption and the ocean surface also unleashed an unexpected type of tsunamis called meteo-tsunamis. These type of waves travel faster than those associated with displacement of the ocean bottom from large earthquakes, and they appear to “jump continents”, with tsunamis recorded from the Pacific to the Atlantic.

The eruption generated a wide range of pressure perturbations including audible sound. Sound from the eruption was reported more than 10,000 kilometers (6,000 miles) from the source in Alaska -- where it was heard as a series of booms. This was further confirmed by data recorded by microphones installed in the region.

According to Professor De Angelis, one of the reasons that the Hunga eruption was so energetic -- creating a plume some 58 kilometers high (36 miles) -- was due to "hot and gas-charged magma that entered into contact with the seawater very rapidly. The rapid transfer of intense heat between hot magma and the cold water causes violent blasts capable of tearing the magma apart."

The paper '`Atmospheric waves and global seismoacoustic observations of the January 2022 Hunga eruption, Tonga’ (DOI: 10.1126/science.abo7063) is published in Science.

Professor De Angelis is a member of the Liverpool Earth Science research group in the Department of Earth, Ocean and Ecological Sciences.