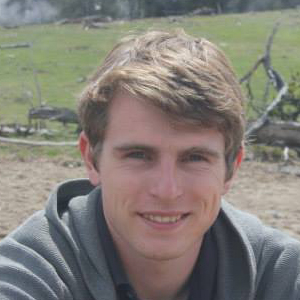 'The Deformation and Metamorphism of Micas and their Implications for the Strength of the Earth's Crust: Case Studies in the Italian Alps and New Zealand'
NERC Doctoral Training Program
Supervisors: Dr. Elisabetta Mariani, Prof. John Wheeler & Prof. Daniel Faulkner
Description: Global tectonic stresses deform the Earth’s crust heterogeneously, with large strains localised into fault and shear zones on a variety of scales. Weak phyllosilicate minerals such as micas form a major component of rocks located within fault and shear zones, reducing their strength and focusing deformation. My project seeks to understand the mechanisms by which micas deform and the metamorphic reactions which occur within phyllosilicates during deformation. Samples will be studied using a combination of optical microscopy, scanning electron microscopy, X-ray diffraction and electron backscatter diffraction techniques to observe and quantify the behaviour of micas in these dynamic systems. - Email Joseph

Description: Energy production from fractured geothermal reservoirs relies partly upon maintaining open and interconnected fracture networks through which hot fluid can flow efficiently. Changes in conditions over time often results in the precipitation of alteration minerals as veins - this process is termed fracture healing. Evolution of microstructures, frictional properties and permeability as these minerals precipitate is not well constrained experimentally at high temperatures.

Using a high pressure triaxial deformation apparatus with an internal furnace, experimental mineral veins will be formed by controlling temperature, fluid pressure, composition and flux. Frictional properties of clays will be explored using a direct shear assembly. Synthetic microstructures will be compared to natural examples occurring in an exhumed geothermal area of northern Chile, where fieldwork will focus on gaining an understanding of vein morphology and composition across a stepover fault zone. Samples will be analysed using a combination of optical and scanning electron microscopy. Thermal effects will be investigated using thermogravimetric analysis. Variations in geochemistry will be assessed using fluid inclusions, cathodoluminescence, electron microprobe and QEMSCAN. - Email Steve

'Journey to the centre of the earthquake; what affects earthquake source properties and radiated wavefields?'
NERC Doctoral Training Program
Supervisors: Prof. Dan Faulkner and Dr. Ben Edwards
Description: Earthquakes have the potential to cause massive human, structural and economic devastation. The frequency and magnitude of seismic waves produced are a product of the earthquake source (where the fault zone is slipping) and the path along which seismic waves travel. Little is known about the seismic source, in particular how fault zone characteristics affect slip kinematics. My project aims to understand how the properties of the earthquake source are affected by the country rock surrounding a fault. Using laboratory experiments to simulate spontaneous earthquakes with blocks of varied elastic properties, the velocity and amplitude of ruptures will be observed. Numerical modelling of the ruptures will be developed in order to upscale results and predict the larger-scale behaviour of earthquake ruptures. - Email Louisa

'Deformation in the crust and the role of feldspar: an Alpine study'
NERC Doctoral Training Program
Supervisors: Prof. John Wheeler & Dr. Elisabetta Mariani
Description: At the elevated temperatures and pressures of the middle crust, rocks exposed to tectonic stress deform viscously (i.e. change shape without fracturing). Despite being one of the most common minerals in the Earth’s crust, our understanding of how viscous deformation is accommodated in feldspar remains incomplete due to its low crystal symmetry. We are using electron backscatter diffraction to characterise how neighbour grains have interacted during deformation in feldspar-rich metagabbros from the Italian Alps, and which deformation mechanism dominated strain accommodation. We are also using microstructural observations to investigate how metamorphism and deformation have combined in our samples to produce the strong textural domains we observe. The project aims to better understand how rocks may deform by diffusion creep at natural strain rates in the Earth’s crust. - Email Joe

'The origin of pseudotachylytes in seismogenic fault zones and their role during slow interseismic creep'
NERC Doctoral Training Program
Supervisors: Dr. Elisabetta Mariani & Prof. Daniel Faulkner
Description: Pseudotachylytes are fine grained, dark rocks that may also contain glass and show an aphanitic texture similar to that of some basaltic glasses. There is a general agreement that, in the seismogenic crust (to ~15 km depth), these rocks result from comminution and localised melting of the country rock due to frictional heating along fault and shear surfaces during an earthquake.  Pseudotachylytes are also found in exhumed sections of the lower continental crust and upper mantle, associated with deep earthquakes, but the mechanisms by which they form under these conditions are little understood.  My project seeks to investigate and clarify the relationship between the pseudotachylytes and associated mylonites observed in active as well as ancient regional fault zones, to gain insight into the conditions under which a transition from frictional sliding to plastic flow may occur. This will improve our understanding of the processes that control aseismic slip in the earthquake cycle and the links between rupture in the seismogenic crust and mechanisms that accommodate deformation in the deeper crust. - Email Laura