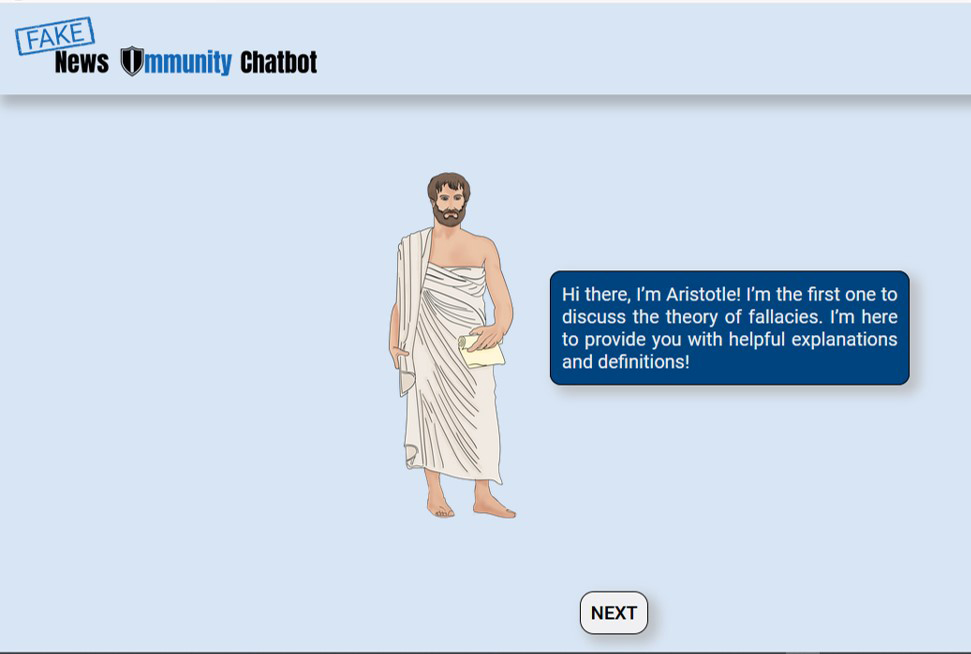 Experts in computational communication at the Universities of Liverpool and Dundee launched a chatbot enabled website, based on the work of some of philosophy’s greatest critical thinkers, to help improve people’s ability to spot semi-fake news.

The Fake News Immunity Chatbot brings classical philosophers, Aristotle, Socrates and Gorgias to life on your computer screen, introducing users to their rhetorical strategies, or fallacies, at the same time as testing susceptibility to a selection of fake and semi-fake news items.

The chatbot is a quiz-like game that is fun, easy to access and can also help people find a way through the blizzard of misinformation currently circulating as Covid-19 disrupts life across the planet.

Misinformation – or semi-fake news – is categorised as information which is misleading but was not intentionally fabricated, unlike disinformation, or fake news.

Dr Elena Musi, in the University’s Department of Communication and Media, is leading the project. She said: “This is the first attempt to leverage human computer interaction to try and help the public acquire the skills needed to recognize the grey area of misinformation.

“Our chatbot is unique as it allows people to play and be trained by the greatest thinkers and become their own fact-checkers. You can play by yourself or encourage family, friends or colleagues to join in so you can quiz each other.

“Learning together and helping each other to understand how news is produced for different purposes provides the necessary skills needed to flag misleading content in our news feeds.”

Users choose an identity and are then guided through a discourse with the three philosophers, as each teaches their rhetoric speciality: Aristotle explains the ten fallacies, Socrates encourages the need to question everything and Gorgias challenges mainstream opinions.

News items are offered up and users are asked to determine whether they are misleading, and why, with the support of the three philosophers and their ancient critical thinking techniques.

The game has three levels – credulous, skeptic and agnostic – with users competing to pick up points shaped as gadflies. Fellow classical philosopher, Plato described Socrates as a gadfly stinging people with questions to keep them on a virtuous path.

Dr Musi said: “We hope that with our chatbot, people will develop critical thinking that strengthens their digital literacy and helps them and their communities to become more resilient to information manipulation.

The Fake News Immunity Chatbot launched as part of the UKRI-funded Being Alone Together: Building Fake News Immunity project, which seeks to combat the proliferation of misinformation – described by the World Health Organisation as an “infodemic” - by helping the general public build ‘fake news immunity’.