What are the 'Classics'? By Guendalina Taietti.

On a bright and sunny afternoon in London Dr Joanne Backhouse, from the University of Liverpool’s Continuing Education department, led a group of our enthusiastic students through a guided tour of the Egyptian collection in the British Museum. Joanne, who is an expert Egyptologist, escorted a rapt audience through the museum. This included a tour of the sculpture gallery, coming face to face with some of Egypt’s greatest rulers, for example Amenhotep III and Rameses II.

‌‌The museum displays the largest collection of Egyptian objects outside of Egypt. They have been an integral part of the British Museum since its founding in 1753. With galleries covering two floors, the collection includes Egyptian sculpture, Egyptian life and death, Early Egypt and Nubia. Joanne, whose previous courses include, Images of the Divine: Gods and Goddesses of Ancient Egypt and Feasting, Festivals and Jollification in Ancient Egypt, is one of our most popular Egyptologist tutors and the perfect guide to the collections.  This visit was an optional extra to a course Joanne has just run in the department, Art in Museums, The Treasures of Ancient Egypt. This allowed the students to see artefacts first hand that had been discussed in the classroom.  Joanne will be conducting a similar visit next year to the Petrie Museum on the 18th March 2019. This will be an optional extra to Joanne’s course on Pre-dynastic Egypt, Before the Pyramids: The Artists of Ancient Egype  running Feb 2019.

The tour began in the Egyptian Sculpture gallery that houses the Rosetta Stone – the key to understanding Egyptian Hieroglyphs.  A replica is available in the Enlightenment Gallery for close study, as demonstrated by Mary who had joined the group from Watford Even though I have visited many times I learnt new facts. I enjoyed sneaking off to see the replica Rosetta Stone in the Enlightenment Gallery as this doesn’t get swamped with tourists like the real one 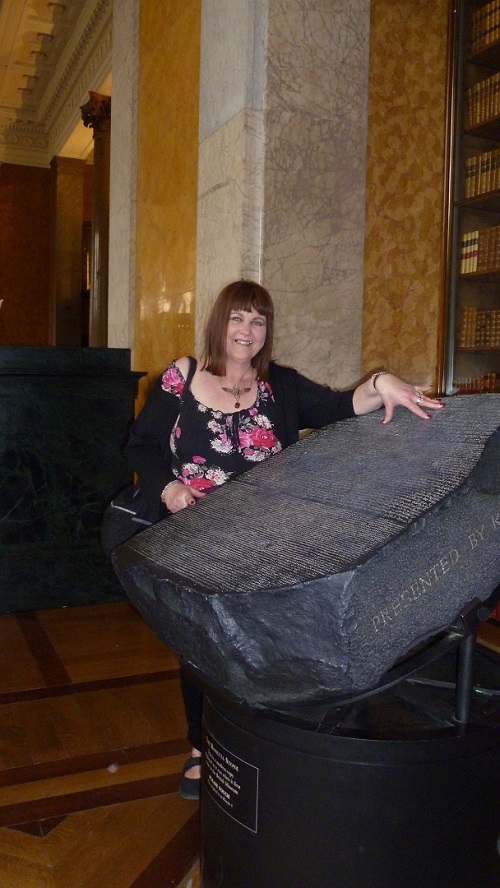 After lunch the group moved upstairs to the Nebamun gallery, where the tomb of the New Kingdom official has been recreated using 11 fragments and contemporaneous objects.  The fragments are masterpieces of Egyptian art.  Joanne used the images, including the banquet scene and table of offerings, to explain the functions of Egyptian tombs and the symbolism inherent in the imagery l have visited the British Museum many times many times but it you understand so much more when accompanied by an Egyptologist. I had never really studied the Nebamun gallery before, but Dr. Backhouse's knowledge and enthusiasm brought the exhibitions to life and showed me what l had missed said student Rose Jackson, pictured below.

After which the tour proceeded to the Early Egypt gallery, which houses objects over 6000 years old, illustrating Pre-dynastic and Early Dynastic Egypt.  Joanne discussed continuity and change in the art of ancient Egypt. Before moving onto the Nubia gallery which contains artefacts which illustrate the cultural interaction between Egypt and her southern neighbour.

This was an enjoyable and thought-provoking journey through ancient Egypt and an incredibly positive experience for the students, many of whom travelled with Joanne from the North West to London, or they had travelled from the South West and joined the group at the museum. It was a pleasure and privilege to lead a tour around the British Museum, using the art and artefacts to bring to life concepts discussed in the classroom.  The Nebamun gallery is a personal favourite of mine and I never tire of looking at the beautiful images created over 3000 years ago. Discussions with the students were stimulating and provided new insights Said Joanne. if Joanne does another London session I will definitely book added Mary.

Joanne will once again be teaching for Continuing Education in 2018/19. The Jewell Box of Ancient Egypt begins on the 5 October for 10 weeks and you can read about the course and enrol here.  In March Dr Backhouse will lead a trip to the Petrie Museum at the University College London for more information on that trip, and to enrol click here.

Back to: Continuing Education