A collaborative research team, led by the University of Liverpool, has discovered a new inorganic material with the lowest thermal conductivity ever reported. This discovery paves the way for the development of new thermoelectric materials that will be critical for a sustainable society.

The discovery, reported in the journal Science, represents a breakthrough in the control of heat flow at the atomic scale, achieved by materials design. It offers fundamental new insights into the management of energy. The new understanding will accelerate the development of new materials for converting waste heat to power and for the efficient use of fuels.

The research team, led by Professor Matt Rosseinsky at the University’s Department of Chemistry and Materials Innovation Factory and Dr Jon Alaria at University’s Department of Physics and Stephenson Institute for Renewable Energy, designed and synthesised the new material so that it combined two different arrangements of atoms that were each found to slow down the speed at which heat moves through the structure of a solid.

They identified the mechanisms responsible for the reduced heat transport in each of these two arrangements by measuring and modelling the thermal conductivities of two different structures, each of which contained one of the required arrangements.

Combining these mechanisms in a single material is difficult, because the researchers have to control exactly how the atoms are arranged within it. Intuitively, scientists would expect to get an average of the physical properties of the two components. By choosing favourable chemical interfaces between each of these different atomic arrangements, the team experimentally synthesized a material that combines them both.

Image below: Using the right chemistry, it is possible to combine two different atomic arrangement (yellow and blue slabs) that provide mechanisms to slow down the motion of heat through a solid. 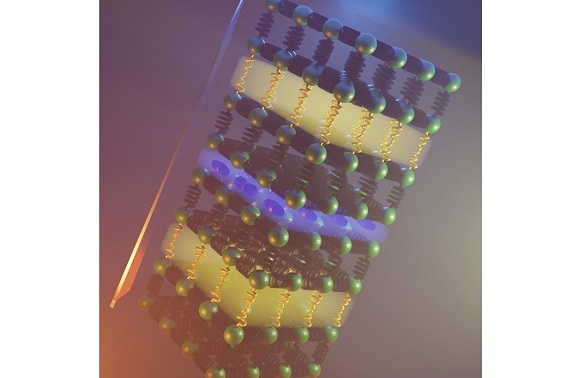 This new material, with two combined arrangements, has a much lower thermal conductivity than either of the parent materials with just one arrangement. This unexpected result shows the synergic effect of the chemical control of atomic locations in the structure, and is the reason why the properties of the whole structure are superior to those of the two individual parts.

Professor Matt Rosseinsky said: “The material we have discovered has the lowest thermal conductivity of any inorganic solid and is nearly as poor a conductor of heat as air itself.

“The implications of this discovery are significant, both for fundamental scientific understanding and for practical applications in thermoelectric devices that harvest waste heat and as thermal barrier coatings for more efficient gas turbines.”

Dr Jon Alaria said: “The exciting finding of this study is that it is possible to enhance the property of a material using complementary physics concepts and appropriate atomistic interfacing. Beyond heat transport, this strategy could be applied to other important fundamental physical properties such as magnetism and superconductivity, leading to lower energy computing and more efficient transport of electricity.”

Approximately 70 percent of all the energy generated in the world is wasted as heat. Low thermal conductivity materials are essential to reduce and harness this waste. The development of new and more efficient thermoelectric materials, which can convert heat into electricity, is considered a key source of clean energy.

The paper` Low thermal conductivity in a modular inorganic material with bonding anisotropy and mismatch’ (doi: 10.1126/science.abh1619) is published in the journal Science.

This project has received funding from the Engineering and Physical Science Research Council (EPSRC grant EP/N004884), the Leverhulme Trust and the Royal Society.