I chose to study at Liverpool, partially as the department had an excellent reputation, but also for the excitement of the city.

The department gave me a wide range of knowledge in the core chemistry modules which meant I could make an informed decision on the areas I preferred, and the choice of module options meant I could choose topics which I was interested in and would help me in the future, including other areas of science such as biology.

Whilst at Liverpool, I particularly enjoyed the lab sessions: synthesising compounds, using analytical and spectroscopic instrumentation to deduce structures, and acquiring many essential skills. My final year project was preparing gold-silver alloy nanoparticles by a reduction, and studying how their composition changed with certain variables such as temperature. I really enjoyed being given the chance to develop the project independently, whilst having the staff and peers around to advise and discuss ideas. It also gave me practical experience presenting my findings in various formats, and definitely increased my interest in lab-based research, leading me into an MSc in Forensic Science and then my current PhD in Analytical Chemistry.

During the 2012 Olympics I will be working with the Drug Control Centre as an analyst. My role involves preparing the urine samples received from the athletes for the initial screening of performance enhancing drugs. It’s great having the opportunity to be involved with the Games! 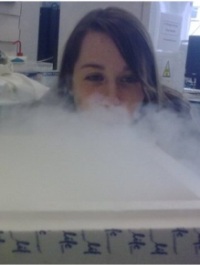