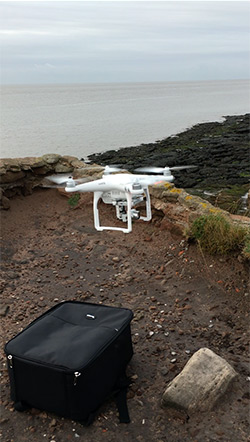 Hilbre is a chain of three islands and site of special scientific interest in the Dee Estuary, near West Kirby on the Wirral coast. It is the setting for Studio 3's first semester project, to design a Lifeboat station to sit at the North end of the island.

This is the first real flight of the drone that has been purchased by Studio 3 and which will go on to serve the department.

The drone was flown by Martin Goffriller who has also helped greatly and is advising about the technical side of the drone and its software.

Martin writes: "The aim of the trip was to produce the necessary imagery in order to create a full-scale orthophoto of the islands as well as making a photogrammetric model thereof.

‌For capturing the imagery we used a DJI Phantom 3 UAV flying at an altitude of 60m and at a speed of some 25Km/h taking stills at regular intervals along a pre-programed route. By flying at low tide we were able to include those areas that are normally under water and thus model the submerged topography of the site.

Additionally we also made some video clips flying along the length of the islands to illustrate the context and climatic conditions of the day.

The resulting imagery was processed using Agisoft Photoscan Pro to produce a 1.2Gb Geo-tiff orthophoto, and the resulting model will be used by students to conduct additional site analysis and aid in their designs."