I think he probably was gay. There was a translation error. It was supposed to say ‘Alexander the Gay’, but someone translated it wrong to ‘Alexander the Great.’ (Fanpop.com)

"Ever since the Twentieth Century discovered ‘that horrid thing Freud called sex’ (as E. F. Benson put it) and began to consider sexual preferences as an integral part of sexual identity, Alexander the Great has been scrutinized and analysed for what his love life said (or says) about the man himself. In his 2006 book Alexander’s Lovers, for instance, Andrew Chugg notes that, ‘to understand Alexander well, it is necessary to follow his heart more than his policies’.

The question of Alexander’s homosexuality, once the preserve of scholars such as Tarn whose determined attempt in 1948, ‘to straighten the matter out’ (no pun intended, surely) and close future discussion down, met only with Badian’s hatchet-job of a dissection of Tarn’s own pedantic conservatism a decade later.

The sexual revolution of the 1960s and 1970s stimulated even Classicists to think in new and exciting ways, and Alexander’s sexuality was thrown wide open for debate – in classrooms, on gay political marches, in popular literature, in magazines, in pornography – and the strengthening gay communities of the liberal west happily embraced the ancient ruler not only as a gay prototype, but as a gay hero. In recent decades enthusiastic (if flawed) gay-interest websites have been busily appropriating Alexander as a role model for the modern gay man; so much so, indeed, that the Cassell’s Queer Companion entry dedicated to the Macedonian conqueror notes that Alexander is a staple in the long list of historical gays that have been ‘claimed ‘from history. 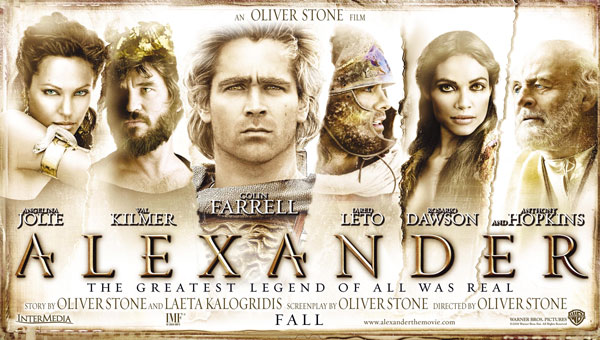 The lecture I will be delivering on 21 February, during LGBT History Month, is not about the real Alexander, of course; how could it be? Nor is it about the historicity or even the historiography of his sexuality, although these thorny subjects continue to perplex and divide both Alexander-scholars and Alexander-devotees alike. The talk is not even concerned with ideologies surrounding ancient expressions of sexual identity either, but it does look at contemporary expressions of the sexual and gendered self because our focus is exploring modern concepts of homosexual identities which have attached themselves to the figure of Alexander the Great. It is the modern perception of Alexander’s sexuality – his queerness – that concerns me.

I explore this image in literature, film, and other forms of popular culture in the twenty-first century, but I take as my starting point a dominating and influential image of Alexander created in the twentieth century – primarily the late 1960s and early 1970s – by the author Mary Renault. At the conclusion of her notes to The Persian Boy, Renault observed of Alexander that ‘no other human being has attracted in his lifetime, from so many men, so fervent a devotion.’

This passion has persisted well beyond Alexander’s own lifetime, as exemplified by Mary Renault’s own response to him which was specifically elicited by the question of the ruler’s sexuality. Taking as its starting point this lecture will examine several twenty-first century responses to ‘Alexander the Gay’ by people who identify themselves through a range of genders and sexualities. These images reflect the advances in, and development of, sexual and gender liberation experienced in the west from the 1960s onwards, but they also reflect that these advances are not uncontested – particularly by some Christians and Nationalists.

Alexander continues to be a source of inspiration and of heated debate. For some though, Alexander is not just a top ten gay hero, he is the ultimate fantasy whose kiss we continue to crave."